For the Love of Louboutin 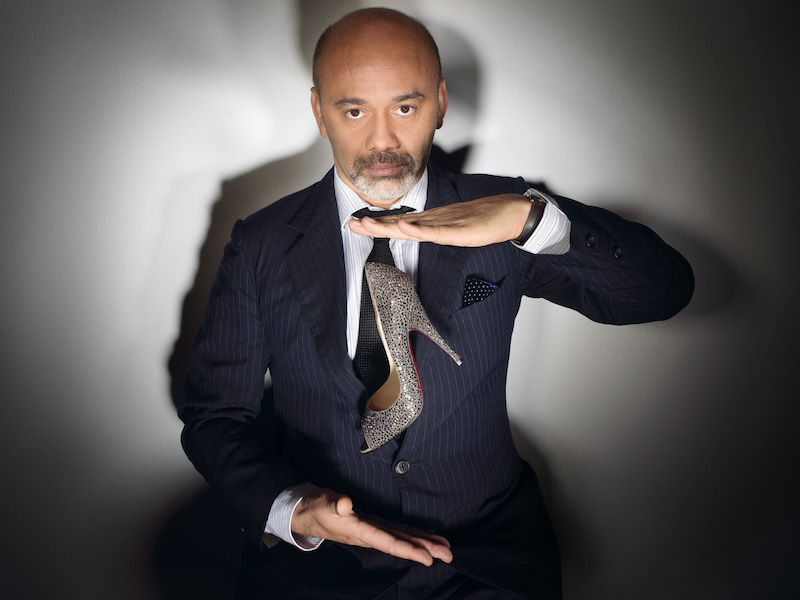 Christian Louboutin doesn’t just have an office in Paris, he has a street! Half the buildings on the Rue Jean-Jacques Rousseau belong to him and half the shoes walking it up bear his trademark red sole. But if you were expecting his HQ to be as soigné as his shoes, you’d be in for a shock: it’s a warren of a place centered on a meeting room furnished with a vast 1970s striped sofa and a glass-topped coffee table with a reclining panda for a base.

It is 23 years since Louboutin looked at the prototype of his first shoe and knew that something was wrong. “My drawing of it was better,” he says now. “I couldn’t understand what it was. Then I turned it over and realized that the percentage of black was huge, but there was no black in my drawing. My assistant, Sarah, was painting her nails, so I grabbed her nail polish, painted the sole and it popped. It gave definition to the heel. It illuminated the shoe.”
Indeed it did. Within weeks, women were telling him that his shoes were man-magnets. If a shoe can be iconic then Louboutins, with their scarlet soles, are. Now, in a logical extension of that first foray with nail varnish, he is launching his own range of polishes — 31 colors including a stunningly glossy scarlet, which could prove useful if your soles are not as red as they used to be, or indeed (perish the thought) never were. Three years in the planning, it’s seriously good nail varnish and the bottles certainly look different: the cap is an 8-inch stiletto. Louboutin wants it to be not just nail varnish but a beautiful object in its own right, which women will want to display in their bathrooms.
Louboutin, 51, was born in Paris to a carpenter father and housewife mother. “My father told me that wood has a grain. He taught me that, if you are skilled, if you sculpt in the direction of the grain, you can do beautiful things. If you carve against the grain, you will have wrinkles. No, not wrinkles,” he corrects himself, “splinters. I took that as a general thing in life. You have to go with the flow.”

The youngest of five, and the only boy, Louboutin’s four sisters were between 12 and 16 years older than him. He used to sit and listen to their conversations and watch how different they were when men were around. “They didn’t consider me to be a masculine presence because I was too young. It’s funny now how many of my girlfriends tell me that they’re completely comfortable with me, more than with other men.”

Louboutin was 12 when he realized that he wanted to be a shoe designer: a museum next door to the family’s apartment had a poster outside with a sketch of a stiletto on it and the young Christian sketched and re-sketched it obsessively. He effectively left home at 13 and pretty much stopped going to school. “I was out every night. I have a piece of paper which says that I missed 92 days in one year,” he says. Instead, he spent his time living with friends, partying and going to see showgirls, whose shoes and costumes fascinated him. The Folies Bergère was his favorite, because the girls were more extravagantly dressed, but the Moulin Rouge was on the list too. What on earth did his parents think?
“They were fine with it,” he shrugs. “I was still a very nice boy, I wasn’t, like, I hate you, I’m taking drugs. I was a cute boy.”
Who paid the bills?
“My family,” he says. “I wasn’t working. I was very spoiled.”
At 18 Louboutin finally got a job, at Charles Jourdan. After that, he did freelance work for Chanel and Yves Saint Laurent, stints in leather factories in Naples and Florence and, eventually, returned to Paris to work for Roger Vivier, whom he credits with teaching him much of what he knows. Yet when Vivier died, Louboutin abandoned his fledgeling career. At the age of 24 he decided he didn’t want to do shoes any more, and he didn’t want to work for other people. Instead, somewhat improbably, he became a landscape gardener.
“I love gardens,” says Louboutin, when asked why he chose gardening. “I don’t believe in God at all, but I believe in new beginnings. I don’t like nature the way I like gardens. I love the idea that everything has been created by Man.”
The problem with gardening, he discovered, is that you have to be patient, a quality he singularly lacked then and, to a lesser extent, now. Plus, he missed shoes. He spent hours drawing them every day and had thousands of designs, but the catalyst for him to take the leap and set up on his own was the death of his mother, and the urging of an antique dealer friend. “He said: ‘just go for it.’ That same week, I had dinner with my two oldest friends, Henri and Bruno, and they said: ‘yeah, let’s do it.’ They say don’t mix business with pleasure, but 23 years on we’re even better friends than before. Henri married my sister and Bruno is the president of the company.”
There are now 91 Christian Louboutin shops in 55 countries, and his sexy red soles have been seen on everyone from Cameron Diaz to Carla Bruni-Sarkozy and pretty much every celebrity in between. It was Louboutin who popularized the nude platform stiletto beloved of WAGs and much-imitated on the high street, most notably the LK Bennett version favored by the Duchess of Cambridge, Kate Middleton. In fact, some people say it’s all over for nude shoes because Kate has worn them to death. What does he think?
“I have all respect for what Kate Middleton is doing.”
Could she wear a pair of Louboutins, or are they just too sexy?
“I know that Victoria Beckham offered her a pair of my boots and she looked great in them,” he answers. “She’s been photographed wearing my boots. She looked fantastic.”
Victoria Beckham gave Kate Middleton a pair of Louboutins?
“Yes.”
This is unexpected on every level, not least because I can’t recall ever seeing Kate Middleton in a pair of Louboutin boots. Who knows, perhaps she wears them in private. It’s intriguing.
Louboutin admits that although he loves designing all shoes except clogs (“They have to be feminine shoes”), his heart lies with stilettos. This is, after all, a man who once tried to make a Cinderella-esque glass stiletto.
“You have to try,” he shrugs. “But there is a reason why no one has made a glass stiletto.”
When he started out, a 3-inch heel was considered impossibly high and daring. Now, he makes 8-inch platform heels and believes that what was once considered a high heel is now a midi-heel — and that he’s one of the people responsible!