Celebrity Getaways: Playgrounds of the Rich and Famous 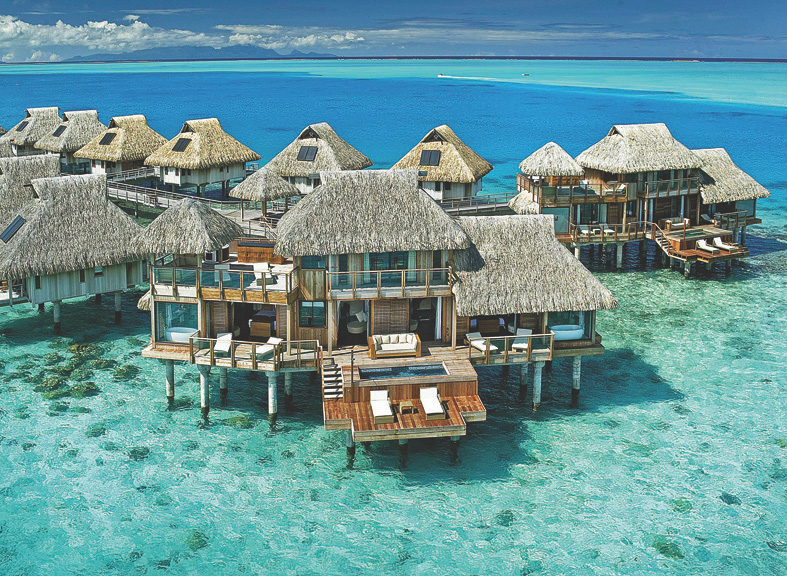 Ever wondered where celebrities go when they need a little R&R away from the prying eyes of the paparazzi? When you are rich and famous the world is your playground and with no price too high for these obscenely well-paid stars they jet off to live it up in the lap of luxury!  Today’s Outlook brings you the most glamorous and exclusive (not to mention expensive) celebrity getaways around the globe! From private islands to beach towns on the French Riviera, read on to catch a glimpse of where the rich and famous let loose and relax.  Here are a few favorite celebrity getaway destinations…
Bora Bora
When it’s pristine beaches with crystal blue waters and breathtaking scenery that celebrities are after, they head to Bora Bora, a small island in French Polynesia.  The perfect destination for a little R&R, the island is set in a turquoise lagoon and barrier reef, surrounded by other small islands. Be it swimming, snorkeling, diving or simply soaking up the sun, Bora Bora—with its views of the extinct volcano Mt. Otemanu, clear Pacific Ocean waters and sandy white beaches—is a favorite holiday destination of Hollywood’s hottest stars!  Charlize Theron, Eva Longoria, Quincy Jones, Christina Applegate and Rob Lowe have all been known to holiday in Bora Bora, as do Meg Ryan and Charlie Sheen. The island boasts a few upscale resorts featuring over-the-water bungalows, including the exclusive St. Regis Bora Bora Resort, where Nicole Kidman and Keith Urban honeymooned in style. Villas at the luxurious resort have their own private pools or Jacuzzis and a butler to cater to your every desire, while the Royal Estate is 13,000 square feet of pure royal luxury!  Featuring three separate pavilions around the private pool, the Estate boasts three bedrooms, two living rooms, a chef’s kitchen, dining room with sunset terrace, as well as a private spa area with a treatment room, sauna, and whirlpool. As if that isn’t exclusive enough, tropical gardens border its private white sand beach!  Fancy going all out and renting out the entire island for a week? The Four Seasons Resort can make it happen for a mere $1,000,000 fee!

Cabo San Lucas
Cabo San Lucas, the sunny, beachside city at the southern tip of the Baja California Peninsula, has long been known as one of the most popular celebrity getaway destinations.  A mere two-hour flight from Los Angeles, Cabo is perfect for a quick holiday away from the grueling eyes of the paparazzi.  The Mexican state is known as a top holiday destination not only for its luxurious resorts and fantastic nightlife, but also for its beautiful beaches and the host of outdoor activities available, from hiking and snorkeling to horseback riding and swimming. Fans of this beachside haven include Cameron Diaz, Kim Kardashian, Sean Penn, Ryan Seacrest, Justin Timberlake, George Clooney and Stacey Kiebler.  Among the regulars are Jennifer Aniston, Eva Longoria, Tony Parker, Beyoncé and Jay-Z. When these stars visit the Mexican resort city they command privacy and pampering.  Popular resorts include One&Only Palmilla resort and The Hotel at Esperanza.  A well-known celebrity hotspot, One&Only Palmilla is a tropical hideaway with guestrooms that overlook the ocean.  Amenities include relaxing outdoor daybeds, built-in Bose sound systems, and even telescopes for whale watching and gazing out at the stars. The Hotel at Esperanza was named one of the world’s top 50 hotels and is a favorite of celebrity couples Gwyneth Paltrow and Chris Martin, and Will Smith and Jada Pinkett-Smith. All the hotel's suites and villas offer ocean views, while some have private pools, a dedicated butler and private chefs for ‘in-villa dining’.

Fans of the beachside haven of Cabo San Lucas, including Cameron Diaz, Jennifer Aniston, Justin Timberlake, George Clooney, Beyoncé and Jay-Z keep coming back to this Mexican resort city for privacy and pampering.

Barbados
The list of celebrities that flock to Barbados is endless; Simon Cowell, the Beckhams, Sting, Davina McCall, Hugh Grant, Jennifer Aniston, Justin Bieber, Tiger Woods, Naomi Watts, Rihanna and Katy Perry all cherish this Caribbean island. With its sandy white beaches, delectable fresh food, historic plantation houses and local rum, what’s not to love?! One thing is for sure, when A-list celebrities visit Barbados they have one destination in mind, The Sandy Lane Resort.  Set on the Caribbean island's upscale west coast, often referred to as the Platinum Coast, the resort is known for its deluxe accommodations and signature pink beach chairs and umbrellas that contrast beautifully with the turquoise sea. The uber-exclusive resort gives the choice of large, stylish rooms with breathtaking views and state-of-the-art amenities or villas, each complete with its own staff and private entrance! The island’s most famous hotel even has underground hallways to provide the ultimate in privacy and boasts three golf courses impressive enough to attract the likes of Tiger Woods! Rihanna chose to forgo the hotel and rented the One Sandy Lane Villa for her family with a price tag of $21.8 million! The compound boasts eight different residences that range in size from 8,000 to 9,500 square feet with sparkling pools, a spa and a private gym, and with championship golf courses and the beach just a few feet away.  Offering all the services you'd expect from a five star hotel including uniformed attendants and servers, this is the ultimate splurge!

The Beckhams, Sting, Hugh Grant, Justin Bieber, Naomi Watts, Katy Perry and Rihanna are just a few of the celebrities who love to escape to this picturesque Caribbean island.

Saint-Tropez
When it comes to living it up in the lap of luxury, it doesn’t get more glamorous than Saint-Tropez! Dubbed the ‘playground to jetsetters, fashion models and millionaires’, the beach town in the French Riviera gained popularity as an extravagant vacation destination thanks in part to French model and actress Brigitte Bardot.  The town boasts Michelin-star restaurants, luxurious private villas, exclusive hotels, high-end fashion boutiques and a seemingly endless array of multimillion dollar yachts docked at its marina!  A hotspot for yacht partying, Saint-Tropez also has amazing clubs and beaches offering all sorts of water sports from windsurfing, sailing, jet and water skiing to scuba diving and snorkeling. Although Saint-Tropez may not be the ideal location for total privacy, it remains a favorite destination for the famous and extremely wealthy, and the town is flooded with the most glamorous celebrities like Victoria Beckham, Rihanna, Tom Cruise, Kate Hudson, Kate Moss, Paris Hilton, Bono, P. Diddy and Catherine Zeta-Jones. As you probably expected, this picturesque and fabulous vacation spot doesn’t come cheap, with average starting rates at over $3,500 per night.

The glamorous Saint Tropez is where stars live it up in the lap of luxury.

Mustique Island
Mustique Island is one of the most exclusive paradise islands in the world!  Located in the Caribbean, Mustique Island was a sugar plantation in St. Vincent and the Grenadines until 1958 when it was purchased by Colin Tennant, the 3rd Baron Glenconner, and transformed into a luxurious private retreat.  A group of shareholder home owners, called The Mustique Company, now owns, preserves and runs the exclusive island, which attracts not only the crème de la crème of celebrities and business moguls, but also royalty. The Duke and Duchess of Cambridge, Queen Elizabeth II and the Duke of Edinburgh all frequent the private island.  Last year, the newly pregnant Catherine, Duchess of Cambridge, was photographed on Mustique, causing quite a stir!  On their vacation, the royal couple stayed at the Aurora Villa, a five-bedroom villa with a guest cottage, which normally costs $25,000 a week. The dream home is furnished with oriental antiques and comes with a staff of six people who oversee such amenities as a private cinema, gazebo and 64-foot infinity pool. The island is surrounded by a marine conservation area, has nine white sandy beaches, picturesque turquoise waters, and is home to a large population of bird life. Other facilities on offer include a health space, a tennis club, an equestrian center and a golf club. Mustique boasts minimalistic but high-end accommodations; there are 100 private residences, with 74 of them available for rent, a 17-room Cotton House boutique hotel, and a five-bedroom guesthouse for those with the social influence and monetary means to afford it!

The beautiful Mustique Island, where celebrities including Prince William and Catherine, the Duchess of Cambridge, love to vacation, is a sugar plantation transformed into a luxurious private retreat.

The Wakaya Club
Want to rub shoulders with the rich and famous? The Wakaya Club in Fiji is the place to go! Nestled among Fiji’s 333 islands lies The Wakaya Club, a coral-encircled private island with only ten super-luxurious residences!  Owned by the Canadian entrepreneur David Gilmour, the island houses a luxury resort perfect for those looking for a relaxing and private vacation with intimate picnics, tennis games and spa treatments.  Celebrities often rent out the entire island to enjoy a vacation with friends and family away from the paparazzi. With capacity for only 20 guests at a time, this exclusive private island resort is where the biggest celebrity names come to getaway.  Bill Gates, Spain’s Crown Prince Felipe, Pierce Brosnan, Michelle Pfeiffer, Russell Crowe, Penelope Cruz, Nicole Kidman, and Keith Richards are all fans of the tropical paradise.  For a luxury cottage at the resort, celebrities dish out anywhere between $1,900 a night to $7,600 for the sprawling hilltop mansion, Vale O—Wakaya’s 1100 square meter luxury residence, complete with its own tennis court, gym and cliff-side swimming pool. Also located on the island are a wedding chapel and a nine-hole golf course for those looking to work on their swing! Dining on the island is a real treat; the cuisine has been devised by celebrity chefs including Nobu Matsuhisa and Charlie Trotter, who trained the island's chefs, while ingredients are picked straight from the resort’s gardens.

Saint-Barthélemy
If you want to holiday like an A-lister head to Saint-Barthélemy, or St. Barts as it’s commonly referred to.  The celebrity elite enjoy everything from spa treatments to sailing on this small island, which is part of the French West Indies. While warm sand and blue waters make it an ideal vacation location, this destination has that and a whole lot more! Celebrities flock to St. Barts for its upscale shopping, restaurants, private villas and mega yachts.  Supermodel Kate Moss and David Letterman both own villas in St. Barts as does Russian businessman Roman Abramovich (his palatial residence is worth an outstanding $90 million).  The island has no shortage of luxury hotels and resorts; Hotel Le Toiny is comprised of 15 villas over 38 acres while the Carl Gustaf Hotel features 14 one or two-bedroom suites surrounded by tropical vegetation.  Each suite is situated in its own cottage, giving the feel of a private tropical bungalow! When it’s all-out pampering the stars are after they head to the exclusive Guanahani Hotel & Spa which offers indulgent week-long treatments. The list of celebrities who escape to St. Barts is endless, from Sting, Paul McCartney, Simon Cowell and Matt Damon, to Naomi Watts, Jon Bon Jovi, Channing Tatum, Rachel Zoe, Miranda Kerr, Tara Reid, Uma Thurman, and Penelope Cruz.  When Paris Hilton, Ivanka Trump or Gwen Stefani visits St. Barts they head to Nikki Beach. Known as ‘The Sexiest Place on Earth’, the beach club is the ultimate blend of fashion, dining, music and entertainment.  If you are Ryan Seacrest, you go to St. Barts and set sail!  The television presenter chose the island as his destination of choice for a little R&R and sailed on a mammoth four-decked yacht worth $58 million.  Named Fortunate Sun, the yacht rents out for as much as $275,000 a week!

The list of celebrities who escape to St. Barts is endless, from Sting and Paul McCartney to Matt Damon, Gwen Stefani and Ivanka Trump… St. Barts is truly an ideal vacation destination.