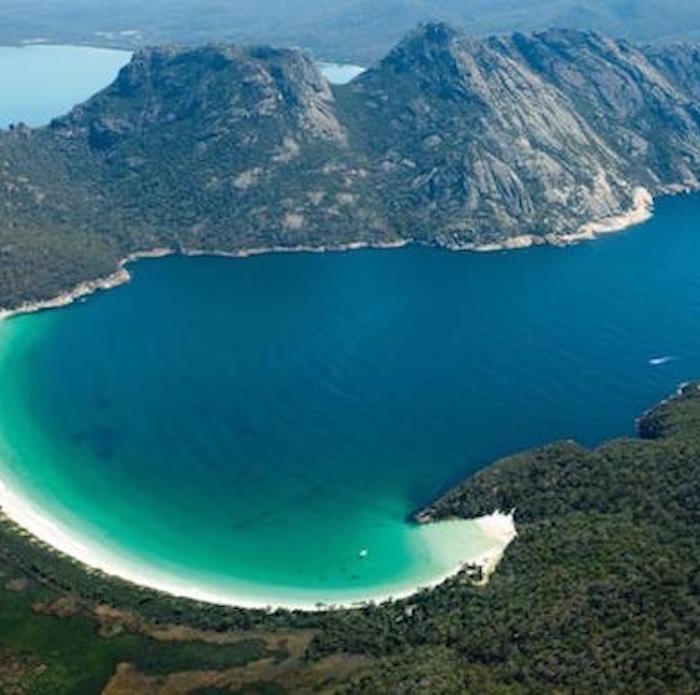 Tasmania is Australia's only island state with a population of roughly half a million people. It enjoys a unique lifestyle and beautiful landscapes while it is separated by a body of water called the Bass Strait that has isolated it from the rest of Australia for thousands of years. Captivating, invigorating and exhilarating will be just some of the words that will come to mind as you enjoy the offerings of this pleasant isle. From relaxing in the comforting ambience of the many village inns on the East Coast to hiking through the National Parks of the West, one of the last great wilderness areas in the world, Tasmania will revitalize your senses. It is a place of wild and beautiful landscapes and friendly, relaxed people, with a temperate climate, rich history and slow pace of life. There is no hustle and bustle, even in the cities. No traffic jams and no smog. Encircled by the Southern Ocean, Tasman Sea and Bass Strait, the air is clean, the water pure and the soil fertile. More than one third of Tasmania is preserved in a network of national parks and the Tasmanian Wilderness World Heritage Area.
For its size, Tasmania has plenty of attractions. Hiking can be a truly breathtaking experience in Tasmania, but be sure to obtain the right gear and local advice and maps. Be aware that mobile coverage is very limited. Tasmania's separation from the mainland, diverse landscape and temperate climate has resulted in many species of plant and animal life prospering in the state. A great number of these species are only found in Tasmania.
The island is home to dense rainforests, mountain peaks, great lakes, gorgeous waterfalls, alpine meadows and fertile farmland. There are 20 national parks in Tasmania, much of which has been declared a world heritage area. This wilderness is virtually untouched and waiting to be explored. You can observe some of the world’s tallest and rarest trees and perhaps catch a glimpse of the distinct wildlife of Tasmania, including the famous carnivorous marsupials: the Tasmanian devil, eastern Quoll, and Tiger Quoll. The Tasmanian Tiger is also indigenous to Tasmania, but this wild dog-like marsupial is believed to be extinct. Undoubtedly the most famous animal in Tasmania is the Tasmanian Devil, named by early European settlers because of its eerie nocturnal growl.
Bird-watching is another major draw in Tasmania, which is home to 12 native birds including the Wedge-tailed Eagle, the Green Rosella, Orange Bellied Parrot and the Black Currawong. There are also some great beach areas in Tasmania. Wineglass Bay has been rated as one of the world’s 10 best beaches. Other beaches include the Bay of Fires and Binalong Bay, both very tropical-looking and popular. Tasmania is also great for outdoor activities like camping, caving, cycling, fishing, diving, kayaking, off-roading, hand-gliding, rock climbing, whitewater rafting, and surfing.

Tasmania has a beauty of its own and an atmosphere quite different from the rest of Australia. Its climate is unpredictable, but tends to be damper than in most other states, resulting in great tracts of pristine forests and, at times, raging rivers. It is a popular area for walking, and the Overland Track between Cradle Mountain and Lake St. Clair, in particular, is one of the world’s most famous treks.

Tasmania's north-west coast is one of the state's most prosperous farming areas and a popular tourist destination. The rich, volcanic soil is ideal for the major agricultural activities - vegetable growing, prime beef and dairy cattle. Launceston, the second-largest city in Tasmania, is on the north coast's Tamar River. The east coast is known to have the finest weather in Tasmania, and is often called ``Tasmania's Suncoast.'' It has white sandy beaches, popular national parks, convict ruins and fishing ports which can serve as a base for diving and sea fishing.


White sandy beaches line the east coast, and Tasmania's most-visited National Park, Freycinet National Park, is in the area. Coles Bay is a popular camping area on the edge of the park for those who want to `get away from it all'; alternatively, venture inside the park to spectacular Wineglass Bay. Hobart, Tasmania's state capital, is in the south-east and boasts historic buildings as well as proximity to regional attractions. The lakes and mountains of the central highlands are a popular destination, offering superb fishing and camping. The midlands are a prime wool-producing area, and Tasmania's major highway passes by many historic towns. Tasmania is all about the natural beauty, coupled with the fine food and wine. There are literally hundreds of wineries to visit and most of them have fine dining rooms to match. Most of the restaurants serve local produce and wine, and there’s no reason to import food here, as the weather is ideal for growing quality produce.


Hobart is located on the estuary of the Derwent River, with a metropolitan population of just over two hundred thousand. Hobart is home to Salamanca Place which is the center of much of the city's cultural and social life, with theaters, restaurants, galleries, cafés, places to stay and all types of shops that you can enjoy any day of the year. On Saturdays, Salamanca comes alive with the famous Salamanca Market. Over 300 stallholders sell produce and crafts from all over Tasmania. Ranging as one of the top attractions in Tasmania, The Salamanca Market is another good reason to check out Hobart for a few days.


Flying is the simplest way to get to Tasmania from the Australian mainland since there are no direct international flights to Tasmania. To get around, you absolutely need a car. Public transportation is very limited and to make the most of your time you’ll want to be as mobile and flexible as possible. Be the passenger if you can - it’s like riding through a fairytale storybook.


Tasmania, an adventure seeker’s playground full of wild rivers, rainforests, glaciated mountain ridges, surf-fringed powder beaches, fern-filled gorges and superb fishing lakes radiating the charm and character of a land that is diversely abundant as well as one of the most enticing places to visit in Australia.