Bee Events honoring the Lebanese Center for Action Against Mines 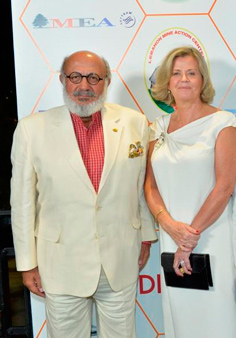 Bee Events & PR and Mr. Nabil J. Tabet have honored the Lebanese Center for Action Against Mines (LMAC) for this fourth edition of the Day of Peace in Lebanon.

Supported by the BLOM BANK, the center is responsible for the demining of Lebanese territory providing security and support to the people still in danger.

When dining in a sumptuous setting, over 300 people were able to see The General Janbay, representative of the General in Chief of the Lebanese Army Jean Kahwagi receiving the trophy of Lebanon's Association for Peace 2015. The Army wanted also to honor Mr. Nabil J. Tabet for his commitment to the Lebanese military.

Among the guests who attended the award ceremony, were name: Mr. Saad Azhari, CEO of BLOM BANK, Ms. Sigrid Kaag, Mr. Araygi, Mr. Pharaon who made a speech expressing the importance of promoting peace in Lebanon as does Mr. Nabil J. Tabet and the procedures undertaken by LMAC along with the BLOM BANK to make the Lebanese territory accessible to all the Lebanese despite the risks his soldiers face.