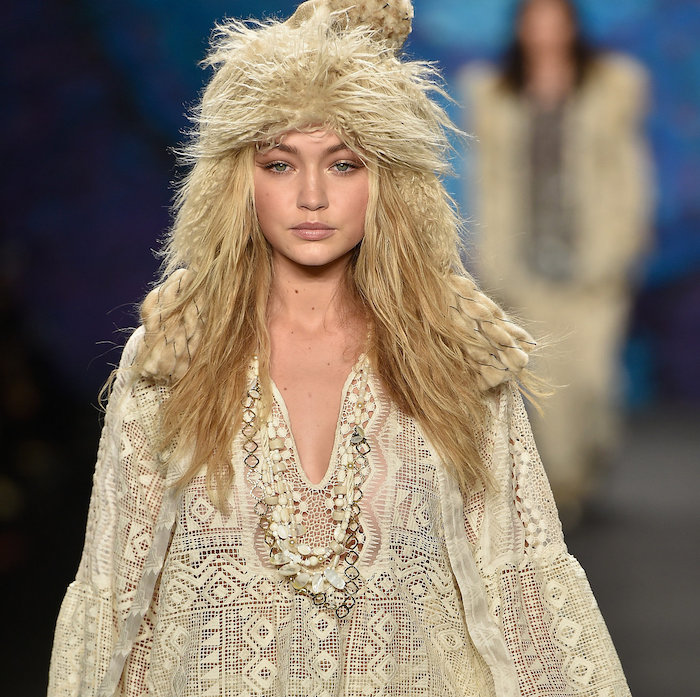 Move over Cara, Karlie, and Kendall, there's a new It Girl in the fashion world and her name is Gigi Hadid. Within a span of 18 months, the buxom supermodel has appeared in Sports Illustrated's Swimsuit Issue, posed and preened in Taylor Swift's Bad Blood music video, fronted campaigns for Guess and Maybelline, become the face for Tom Ford's Velvet Orchid fragrance, and has recently been announced as the new face of British retailer Topshop, replacing none other than good friend Cara Delevingne.  Without a doubt, Hadid is the latest example how the power of social media can create virtually instant stars.

Hadid’s rise to fame has been accelerated by hanging out with BFFs like Taylor and Cara and becoming part of the Twitter–Instagram universe that retailers and fashion brands crave. Her success trail began in Santa Barbara, California where she grew up as the daughter of former model and Real Housewives of Beverly Hills star Yolanda Foster and multi-millionaire architect/real estate tycoon Mohamed Hadid. After her parents' divorce, Hadid found herself with a fabulously new stepfather in songwriter/music producer David Foster, whom Yolanda married in November 2011 in a star-studded ceremony. With her exotic Middle Eastern and Dutch features, the 20-year-old Gigi Hadid has emerged as one of the fashion world's hottest new personalities. With her family connections, does she feel she was destined to make her mark? "I've been very lucky to have great friends and family behind me," Hadid admits.  "My mom was a model and she taught me a lot about the business so that when I did get my chance I understood how things worked. I'm also very grateful that in this era of social media you can achieve very high visibility in a short space of time and people can get to know who you are so quickly.  That's what has helped me find the kind of recognition you need to do fashion campaigns and become a brand ambassador."

An important aspect to Hadid's elite status is her refreshing personality and down-to-earth nature that have endeared to her millions of followers. She's also a rarity in the modeling business for her luscious thighs, curves and boobs, which are a marked contrast to the dominant fashion industry stereotype. Hadid regularly tweets her fans to stay true to themselves and not feel pressured to be ultra-thin or stress about having a perfect bikini body. “When I first went to visit different agencies in New York, a lot of them were like, you have to lose a lot of weight," she recalled. "I would cry at night and my mom would be like, 'We're going to find the [right] people.'"

Added Hadid: "I'm proof that we can have thighs and a butt...I grew up in a beach town, which I think is actually a really cool environment for self-acceptance...I feel better when I eat a burger every other night. (Laughs) I think it's cool to find what makes you feel healthy all year-round. That should be your beach body...It's about feeling your best the whole year!" Having split from her former boyfriend, Australian pop star Cody Simpson, Hadid is currently dating former teen idol Joe Jonas. She regularly hangs out with fellow supermodel Cara Delevingne and singing superstar Taylor Swift. 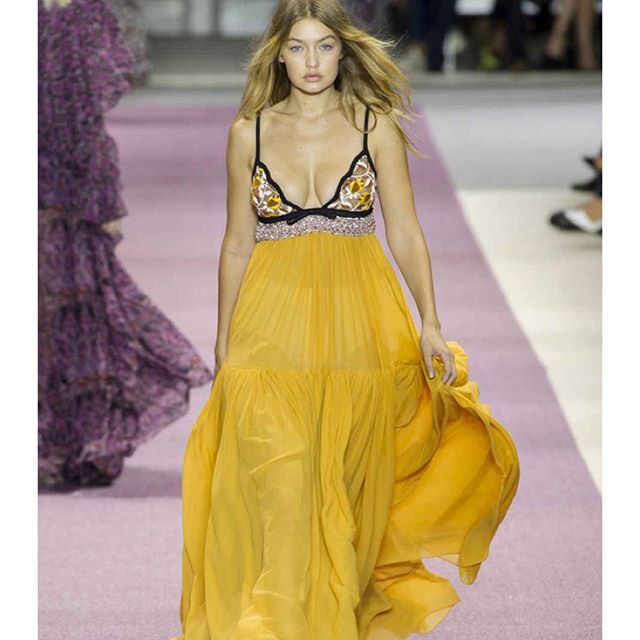 Gigi, it's been a whirlwind last couple of years for you. How are you adjusting to all the success you're having?
It's hard for me to believe that it's all happened so fast and I've already been able to achieve a lot of my dreams.  I've been working so much that I haven't really had much time to stop and think about everything that's been going on. I try to stay focused on my work and take things one step at a time and not feel overwhelmed by it all.


Is there a lot of stress on you?
Sometimes there's a lot of traveling involved but I'm very excited about all the different jobs I've been doing. My mom has been a huge help in preparing me for this kind of career and I've always had a very strong work ethic and sense of responsibility. I'm also very conscious of being very considerate of others and trying to be as nice as possible whenever I connect with other people.


How important is your social media following to you?
It's very important to me. I want people who meet me to know that I have a good heart and that I enjoy getting to know them. I always want to be very real and honest about sharing the things that are going on in my life and I think the people who follow me understand and appreciate that. It means a lot to me to be able to have a very open relationship with people and treat people with a lot of kindness and respect.

Are you also excited about your sister Bella following you into modeling?
I'm so happy and proud of her. She looks so good and I'm trying to help her and guide her as much as I can. I want to be protective of her but without turning into that typical overprotective big sister type of a girl! (Laughs) I want her to rely on me for advice and not think that I'm telling her what to do. I'm also still figuring out my own way in this business. I just want her to be happy and enjoy things as much as I am right now.


How much of an influence has your own ex-model mother been in your becoming a model?
My mom has been a tremendous help to me. She's a great friend as well as a wonderful mother. She's given me so much good advice and I trust her judgment. She also has a very good sense about beauty and makeup. When I was growing up I loved watching her put on her makeup and she always let me play with makeup and not making a fuss over it. I learned from my mom that you should never wear too much makeup and try to achieve a more natural look and I think that has always worked best for me. 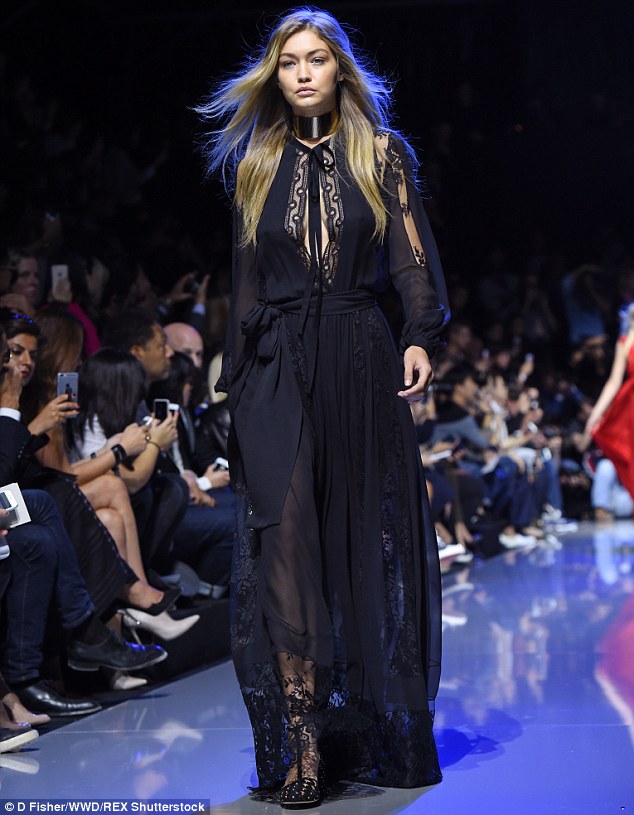 At the Elie Saab Spring-Summer 2016 show

You've carved out an identity for yourself as a very natural and healthy kind of model. Is that important to you?
I was always determined to be the kind of model who looks fit and healthy and not try to be as thin as possible. I'm glad that I've been able to do both Sports Illustrated work as well as high fashion campaigns, which some people never thought I would be able to do. It's been very satisfying for me to be able to do major fashion shoots and be a healthy role model for girls.


You started modeling as a child and you grew up often surrounded by famous people. Did that prepare you for the kind of life you're enjoying now?
It's made it easier because I know what to expect and I'm usually pretty comfortable doing fashion shoots. My mother made me stop doing modeling when I was 9 because she wanted me to have other interests in life.  I would ride horses with my mom and then I began competing in horse shows, which gave me a sense of confidence and discipline. 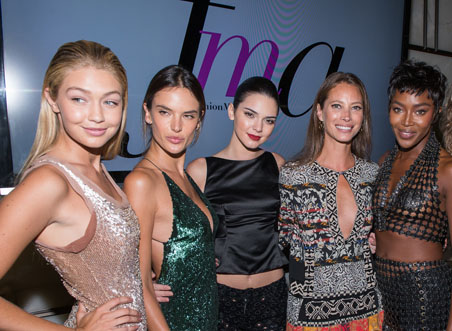 Did you grow up as a fashionista?
No, not at all! My mom didn't let me wear designer clothes or any expensive outfits because she wanted me to lead a very normal and grounded life. I think that was very important to giving me a very good perspective on things so that modeling was something I could choose to do and have fun with it.  Even when my mom would take me to see the agencies and they would tell me that I would need to lose a lot of weight she was there to protect me and support me. She said that it didn't matter, that I could go to university in New York and do modeling part-time if that was how things were going to work out.


What's the best advice your mother has ever given you?
She taught me that it was important to have self-confidence so that modeling wouldn't become the only thing in life and that my identity would be caught up in how much success came with my work as a model. Playing (competitive) volleyball and learning the value of discipline and hard work has been the best possible preparation for me to be able to deal with the realities of this business, especially when I was starting out and it was very hard to get work. It's very important to have a strong sense of self and who you are so that modeling becomes fun and not just a job, which is how I approach it.


What are your diet and fitness secrets?
One thing that has really been important has been playing volleyball.  (Hadid qualified for the U.S. junior Olympic volleyball team - ED). I trained hard for that and I loved the competitive aspect of the sport and I think all the work I put into the sport helped me stay very fit. I still have good muscle tone from all the training I did even though I once had really huge thighs!  (Laughs).