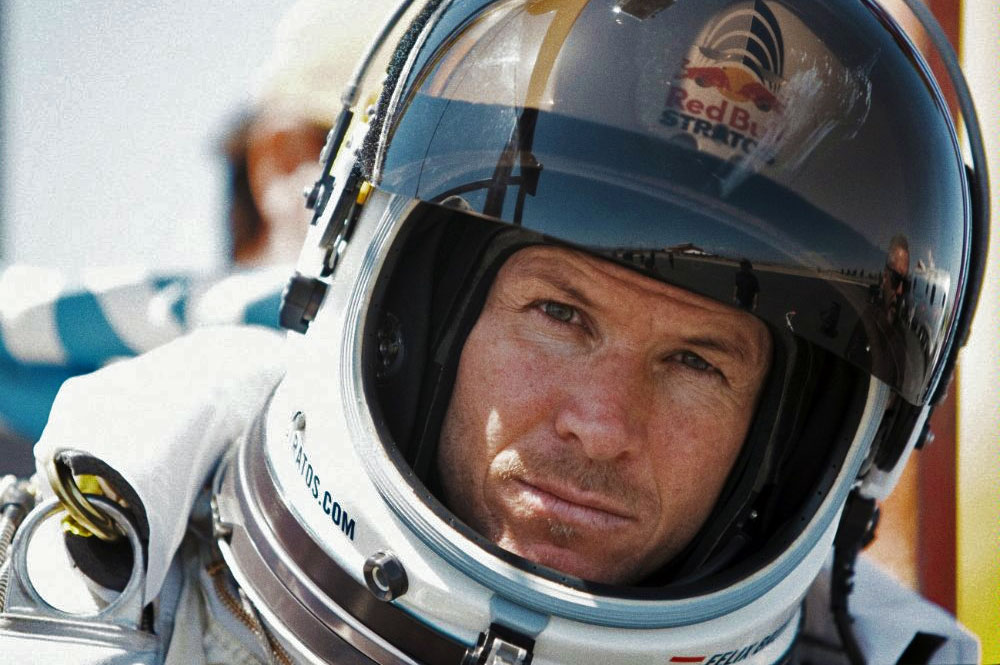 Millions of viewers worldwide tuned in to witness the making of history as Austrian thrill-seeker Felix Baumgartner embarked upon the Red Bull Stratos Mission to the Edge of Space.  Though the mission had been postponed twice before, due to unfavorable weather conditions, the third time was a go. At 9:30 a.m., strapped into a pressurized capsule hanging from a giant helium balloon made of material thinner than a sandwich bag, he set off!


After a two-hour ascent to reach the target altitude, a 40-step checklist was underway. Tension mounted as Baumgartner prepared for his giant leap from the edge of space.  In his quest to make history, Baumgartner was attempting to break the record set in 1960 by Colonel Joe Kittinger, who leapt from 31,333 m as part of a U.S. Air Force mission.  In that moment, as Baumgartner prepared for the jump that would be the climax of five years of comprehensive planning, the courage of Kittinger and the support of his mission control team were his only connections to the world below.  Though prepared in theory, he knew once he left the capsule and entered the hostile environment any number of issues could arise.  Survival was not guaranteed.

Baumgartner opened the hatch and climbed onto a small step 38.6 km above the Earth. He saluted and stepped off the platform.  Viewers, gripped by fear, tension and anticipation, were unsure if they should prepare to witness triumph or tragedy. Approximately three minutes in, he reported his visor was fogging up. He began to veer into a flat spin, which threatened to send blood rushing to his head.  This would inevitably leave him out of control.  After free falling for four minutes and 19 seconds, he deployed a parachute for the final kilometer or two as he descended to Earth. Mission accomplished: he had broken the speed of sound! Tears of joy and relief, accompanied by a roar of applause, greeted him when he made his perfect landing in the New Mexican desert near Roswell.

Having successfully completed the Red Bull Stratos jump from a height of slightly more than 38.6 km while reaching speeds of up to 1356.7 km per hour during the 4 minutes 19 seconds of free fall, “Fearless Felix” set records for the highest manned balloon height, the fastest speed of free fall and being the first human to break the sound barrier outside of a vehicle.

In the spirit of sharing his sense of adventure, Felix Baumgartner provides an insider’s perspective on what it means to make history in one of the territories that remains relatively unchartered: space.

What is represented for you by successfully carrying out your mission?
To me it represents the ultimate power of will.  If you can imagine something – if you create something in your mind – it is possible to make it a reality if you work hard enough at it.  This is exactly what I did.  For ten years I had a lot of ideas, and I really focused on making them a reality. It was never easy. There were a lot of ups and downs, and I dropped the ball many times. But I picked it up again because I knew I had to finish what I started.


How did it feel being “on top of the world”?
It’s always great to be on top of the world!  It was a mix between enjoying the moment – we worked so hard for five years trying to get to that point. When you finally get there, it feels great because you realize you are the only person in the world who has the opportunity and privilege to be there.  On the other hand, you know that you are in a very hostile environment.  If something goes wrong, it will result in death. As soon as I disconnected the oxygen lines from the ship’s system and got out of the capsule, I was only breathing oxygen from my bailout bottle, which is only good for 10 minutes, so I knew I couldn’t just hang around.  I took my ten seconds to enjoy the moment because I knew it was a once in a lifetime experience that would never come back!


Did you ever hesitate, even for a moment?
We have been practicing for this for five years, so in my mind I did that jump many times. It wasn’t a question of ‘Do I do it or not?’ I was ready to go. After they released the capsule, even if I did hesitate, there was no other way back!


If we said you looked like a rag doll flapping about up there, would you take offense?
(Laughs) No, I have a great sense of humor, so I would love to say that I had a rag doll flying around up there.

Would you do it again?
No. Once I've accomplished something, I'm always ready to move on to the next challenge. Just because it worked once doesn’t mean it will work again.  It’s also not just about the jump but the journey which gives me satisfaction.  The moment you get up there, everything is unknown. If I were to go up again, I already know what it looks and feels like, and I have already broken the sound barrier, so the satisfaction just isn’t there anymore.


Is there anything else that could give you that same sense of adrenalin and rush you experienced?
Actually no. It was such an intense moment because it was very unique.  Everyone has seen the footage, and it really is breathtaking, but what I have seen is so much better because the camera cannot capture that scenery. And since I have experienced that, I cannot think of anything else that is as exciting as that was.


Did your father support your decision?
My dad is a very serious guy; we think differently. He always used to say that ‘you can’t make money in sports.’ He was wrong! For so many years I had to fight against my dad’s opinion, but I always told him to at least let me try it for a few years, and if I’m not successful in becoming a professional athlete, I can take it off my list and move on.  This was the first time that I had my parents on site, so they finally had the chance to experience it.  When my dad saw what a mission it was, with 360 people working to help me achieve [it], that was the first time that he really understood, and he was very proud.


What about your mom?
My mother was always very supportive. Of course when I started skydiving, I was 16 years old, and when I told her I was going to become a skydiver, she asked, ‘why?’ Over time she saw that I was doing it in a smart way and that I respect the danger that is involved, so she got used to it.  Ten years later, I started BASE jumping, and she asked me the same thing. ‘Why?’ I was always trying to instill confidence in my mother so that she knew I wasn’t taking stupid risks, but every time I left her – the look in her eyes – I could tell exactly what she was thinking. On this jump, everything was different because she was on site. She could see everything that was happening live; her son was going up to space! She had a lot to deal with that week – with my jump and the death of her sister – but she insisted on coming, saying that if I was going to space she wanted to be there!


What did she say when you landed safely?
That she was very proud. You know, the stuff all moms say!


You have become a role model for people around the world, proving that with determination and drive, anything is possible.  What advice do you have for them?
I always thought that if I did not try to achieve my goal, I would be unhappy for the rest of my life. It would have always been on my mind.  I would have constantly been asking myself what would have happened if I had tried it, and I wanted to answer that question.  My advice to people is that if you have ambition and its big enough – it has to be a big wish – go for it. Focus on it. Find the right people to support you, and don’t listen to anyone who says you cannot do it. So many people will tell you it’s impossible, but you will never know unless you try.

A special autograph from Felix

What’s next?
People always ask me ‘what’s next?’ Sometimes I sit back and think I have accomplished everything, and there is nothing next.  But I am a very motivated person, and working on my sports is not just about the accomplishments but the journey and the wonderful people who have paved the way to my success.  I had two childhood dreams. The first I have now accomplished, so I am moving on to my next goal: to become a helicopter pilot. I now want to use my skills to help with public service – fire and rescue.