The Impressive Rise of Taylor Swift

From her teen country origins to becoming the biggest pop star on the planet. 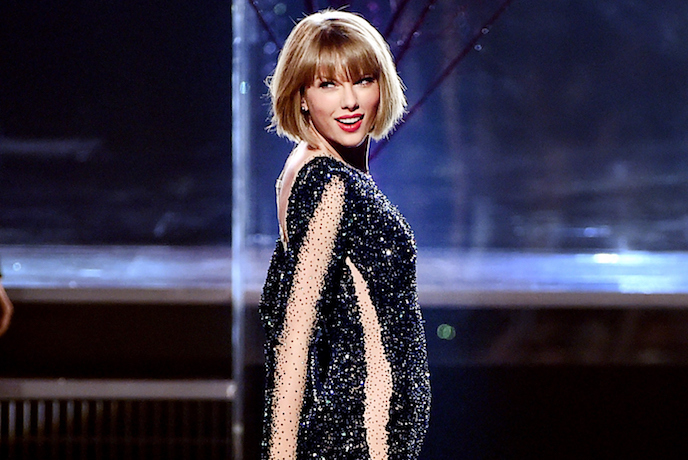 "Do I have lipstick on my nose?" asks Taylor Swift.
As icebreakers go, it's a little unexpected; familiar but not overly so, and every bit as adorable as the Peter Pan-collared playsuit she's wearing.
Just as her giant arena concerts earlier this year were more like big sleepovers, with her confessional songs and the 'I-have-the-same-problems-as-you-do' monologues between them, it seems she turns interviews into friendly chats between friends too.

What is that giant cup she's clinging onto for dear life?

"It's Starbucks. It's this small coffee chain, you might have heard of them?" she teases. "It's kind of artisanal..."

To be cynical for a moment, Swift could well be fake. Completely manufactured. She is, in so many ways, absolutely perfect. Even now, at the end of a long day talking to journalists from all over the world and a hectic week of promotion, she looks almost regal sitting in an armchair; the posture of a ballet dancer, the poise of someone twice her age, the figure of a supermodel.

In a cynical world (where manufactured images and developed notions of the personal brand reign) it'd be easy to believe that Swift, who's been one of America's biggest stars since 2006, was pop music's answer to a Stepford Wife; the beautiful, floral-print-covered exterior hiding something much darker and malevolent underneath. If a focus group were to design a pop star, the result would look a lot like Taylor Swift.

She's sold more than 30 million albums since her self-titled debut was released eight years ago (a tally about to rise rapidly now that her new album is out), has won seven Grammy awards and 11 Country Music Association Awards, among countless others, and, in a string of firsts, became the youngest person to single- handedly write and record a No 1 song on the Hot Country Songs Chart (with her third single, Our Song).

But then, if manufacturing a pop star this successful was easy, why is there only one Taylor Swift?

Her new album 1989, named after the year she was born, provides a few answers to that conundrum, and suggests that the truth might sometimes be what seems like the most unlikely option: Swift is in the position she's in simply because she's so talented!

The people she worked with on her album 1989 (mainly Max Martin and Jack Antonoff) have also worked with many of her peers, but none have had the same spectacular results. That, surely, points to her input being key to her success.¨But on a personal level, she seems extremely grounded.

"I feel like a normal person, but I know my life is not normal," she says. "It's just not. I've been clinging onto my self-awareness for a long time and I'm not willing to lose that. It's the most important thing with regard to me staying sane, continuing to write songs honestly. Having a balanced perception of who I am, and keeping tabs on who and what people think I am, is all part of the way I keep my mind right on a daily basis."

Much of 1989 deals with this subject matter head on. Shake It Off, for example, the lead single from the album, answers her critics directly. The verses list the most common criticisms leveled at her (that she's got nothing in her brain, goes on too many dates and can't dance) while the chorus casually brushes, or rather shakes them off, with Swift defiantly promising never to listen to these negative voices.

"That song's about me not caring what people say. 'So you think I dance awkwardly?'" she says. "'Wait 'til you see the video'."

In spite of all of this, essentially writing songs about herself, she doesn't seem self-involved. "People are busy, I know they don't have the time or energy to develop a complex opinion about each and every pop star. You have to admit and accept some people are going to have a wrong impression of you, or a simplified definition,” she says. "And it's not important that people know every facet of how I live my life, my views on things, how I conduct my business. They don't have time for that. Super-fans do, but most people just want a song they can dance to, relate to or cry to."

Blank Space goes a step further, and finds Swift actually writing a song from the perspective of the person much of the media believes her to be. "I wrote it as a joke, and some people will realize it's done with a wink, but others will think it's the most honest thing I've ever written and that I really am psychotic. The media has created this serial-dating, man-eating, jet-setting, needy person, who reels guys in and then scares them off and writes songs as weapons," she says, before singing the line: "Cause darling I'm a nightmare dressed like a daydream!”

Then she adds: "It's so far from who I am but it's such a complex profile of a human being. If I actually was that girl, Blank Space is the song I'd write and I'd have it as my mantra."

Whatever you think of Swift, rest assured she's already thought it. It's impressive to watch a 24-year-old so in control of her sense of self, and it's a strategy that doubles as a defense mechanism. As she says, "when other people laugh at you and make the jokes, it's nowhere near as funny" as when you're laughing at yourself.

She says 1989 is her first bona fide pop record, which does her previous albums, all poptastic in their own way, something of a disservice, but she does have a point. 2012's Red was a pop record too, but found Swift caught between the stools of her Nashville past and more mainstream future.

"On Red, one track would have a mandolin, another would be an acoustic guitar and then another would be like dubstep, then back to a fiddle. If I learned one thing from that, it's that I wanted to change and make something more sonically cohesive. For 1989, I knew I had to move away from country, because you can't have the synths, automated drums, keyboards and crazy layered vocals, it can't exist in the definition of that style of music,” she says.

"There's a phrase I love; 'If you chase two rabbits, you lose them both', and it's very true here. I used that a lot to try to convince my record label that this was the right choice."

Understandably, she did have to convince her American record label that it was right to make a change. While she argued she was making her fifth album and needed to mix things up, they countered saying she shouldn't try to fix something that wasn't broken.

"I've been through so much since I wrote Red, so I wanted to put that into my next album. What's the point of experiencing so much if you can't use it?" asks Swift.

"I want to challenge and thrill myself with making music."