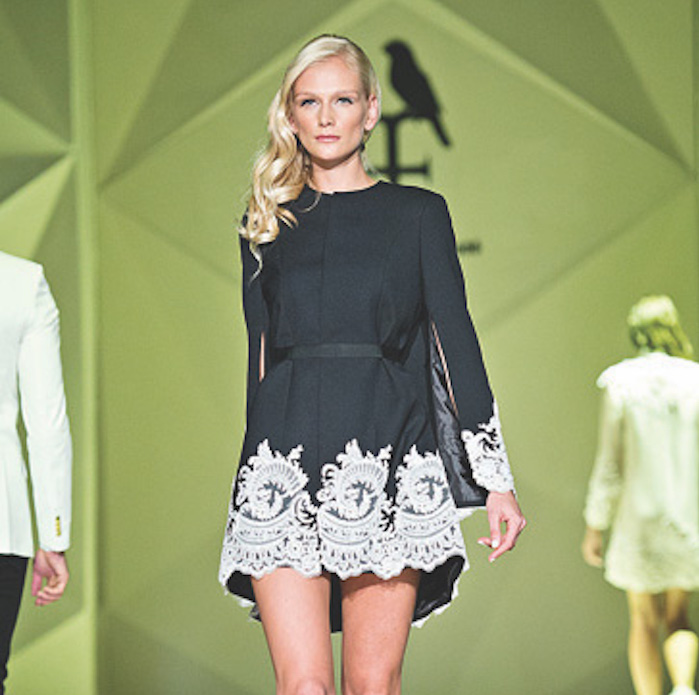 The Middle East is home to some of the world’s most savvy fashion devotees, and is one of the most dynamic markets, fueling and boosting sales significantly on the international front. In recent years, the region has not been solely satisfied with importing foreign designs but has witnessed the emergence of several talented fashion designers of its own. Spectacular home-grown talent from the region is making its way into the international media, markets and celebrity and royal wardrobes. Young and passionate trail-blazing trendsetters are taking center stage in the fashion world, and we bring you a selection of the finest!

From a young age, Charbel Zoe idolized his grandmother and developed a style that is heavily influenced by her couture. He discovered his calling early on and pursued his passion for fashion, copying his grandmother’s style and recreating her unique fashionable touch on doll dresses. Zoe studied fashion design in France and Lebanon, and was heavily immersed in the Paris fashion scene. He proved his distinctive style while working for a number of reputable international and Lebanese fashion houses that have included Givenchy and Elie Saab. Stunning and intricately embellished creations by Zoe have been the choice of prominent Middle Eastern celebrities, including Haifa Wehbe who endorsed his fashion line. One of Zoe’s most notable recent accomplishments is winning the title of "International Fashion Designer of the Year 2013” at the Miami Fashion week.

A native of Pakistan, Amira Haroon grew up in the Arabian Gulf and later moved to Paris to pursue her love of art and design. Inspired by the city’s fashion scene, Haroon remained in Paris as a part time student of fashion design at the Paris campus of the renowned Parsons School of Fashion Design. She launched her ready-to-wear label for women in 2009, with the brand retailing at various locations around the Middle East including the UAE and Saudi Arabia. Haroon also apprenticed in the administration of the world's grandest fashion stage: The Paris Fashion Week, before returning to Dubai where she settled down and launched her private label, 'Amira Haroon' in mid-2009. Her designs are a deep reflection of her culture, where Haroon uses luxurious fabrics, embellishments and fine laces, creating a part vintage and part luxe-bohemian silhouette.

A Doha-based designer, Lama El-Moatassem launched her label Toujouri in 2009 after studying at London's Central Saint Martin and the London College of Fashion and working for prestigious international design houses such as Chloé and Matthew Williamson. Toujouri (‘treasure chest’ in Arabic) is a fashion line that is sensual and modern and is a reflection of the designer’s love of travel and culture. The designs feature intricate and luxurious fabrics and textures like vintage textiles, as well as embroideries and brocades. El-Moatassem’s creations are centered around glamour and are fit for the finest of occasions from elegant evenings to cocktails and the red carpet. Draping and structure are signature designs for Toujouri evening wear, and contrast the billowing fun of kaftans.

With an exotic ethnic blend of Indian and Kuwaiti, Tahir Sultan brings the best of both worlds into a fabulous fashion label that he launched in 2008. A graduate of London’s Central Saint Martin, Sultan interned at a few fashion houses and worked with John Galliano before venturing out on his own. The ultra-luxurious and highly sophisticated, yet easy to wear and flattering designs (no matter your shape), bring together eastern and western sensibilities in a harmonious marriage of cut, color and fabric, while remaining at the forefront of cutting edge style. The Tahir Sultan collections are available worldwide and have been featured by the international press in several prestigious fashion and style publications.

This exceptional brand is the brainchild of three Iranian brothers, Babak Golkar, Haman Golkar and Farhan Golkar, who launched The Emperor 1688 label in 2007. Providing absolute exquisiteness in men’s fashion, The Emperor 1688 delivers designs that combine superb tailoring, classic cuts, and regal prints crafted from the finest European fabrics. The label has a large following and is popular amongst several A-list celebrities, including Robin Thicke and Timbaland. The brothers have won the prestigious “Esquire Designer of the Year Award” for their menswear in 2011, and received a second nomination again in 2012. Today, The Emperor 1688 has two flagship stand-alone stores and international presence in prestigious multi-brand stores such as Saks Fifth Avenue.

Literally translating to “the merging of two”, the label “Endemage” is a collaboration between Omani sisters Nadia and Lubna Al Zakwani. The brand was launched in 2010 and consists of super-feminine dresses, billowy evening gowns and Arabic-infused styles that draw inspiration from traditional Omani designs. East-meets-West in the chic, floor-skimming creations that have garnered a loyal following of savvy fashionistas, who delight in the femininity of the brand’s unique creations that carry an air of Arabian romanticism, à la Jasmine and Aladdin. The realization of a childhood vision was set in motion after Lubna’s graduation from ESMOD in Dubai. With its fresh and edgy take on Arabian design, Endemage will leave its mark on the world of high-end women's wear and Arab fashion.