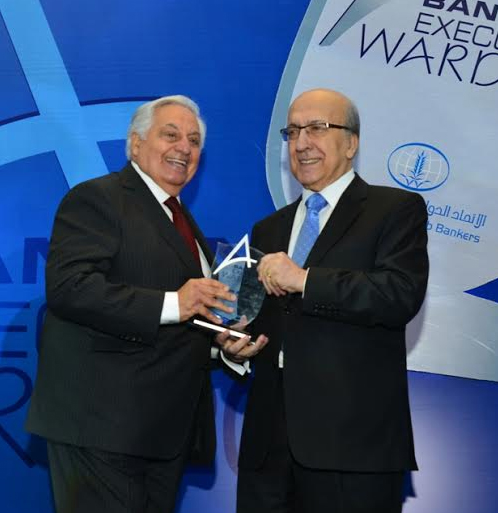 In a ceremony held on the margin of the 2015 edition of the Union of Arab Banks’ (UAB) Annual Arab Banking Conference, “Financing for Development”, which was held at Cairo’s Conrad Hotel, Bank Audi received two distinctive awards. The Bank was awarded the “Best Bank in Lebanon” prize for excellence and distinction among banks in the region. The award was handed to H.E. Mr. Raymond Audi, Chairman – General Manager of Bank Audi sal, by Dr. Joseph Torbey, Chairman of the World Union of Arab Bankers. Randa Bdeir, Group Head of e-Payment Solutions and Card Services at Bank Audi, was also honoured with “The Best Arab Woman Contributor to the Development of Credit Card Payment System in the Arab World”, for her outstanding achievements in the electronic payment industry.

The awards distribution ceremony was held under the patronage of H.E. Dr. Hisham Ramez, governor of the Central Bank of Egypt, and gathered over 700 prominent figures from Arab countries, among whom finance ministers, central bank governors and banks’ CEOs, in addition to leading experts in banking, economics and finance. Once again, Bank Audi stands out and confirms its support to initiatives which promote Arab cooperation and achieve sustainable development in the region.