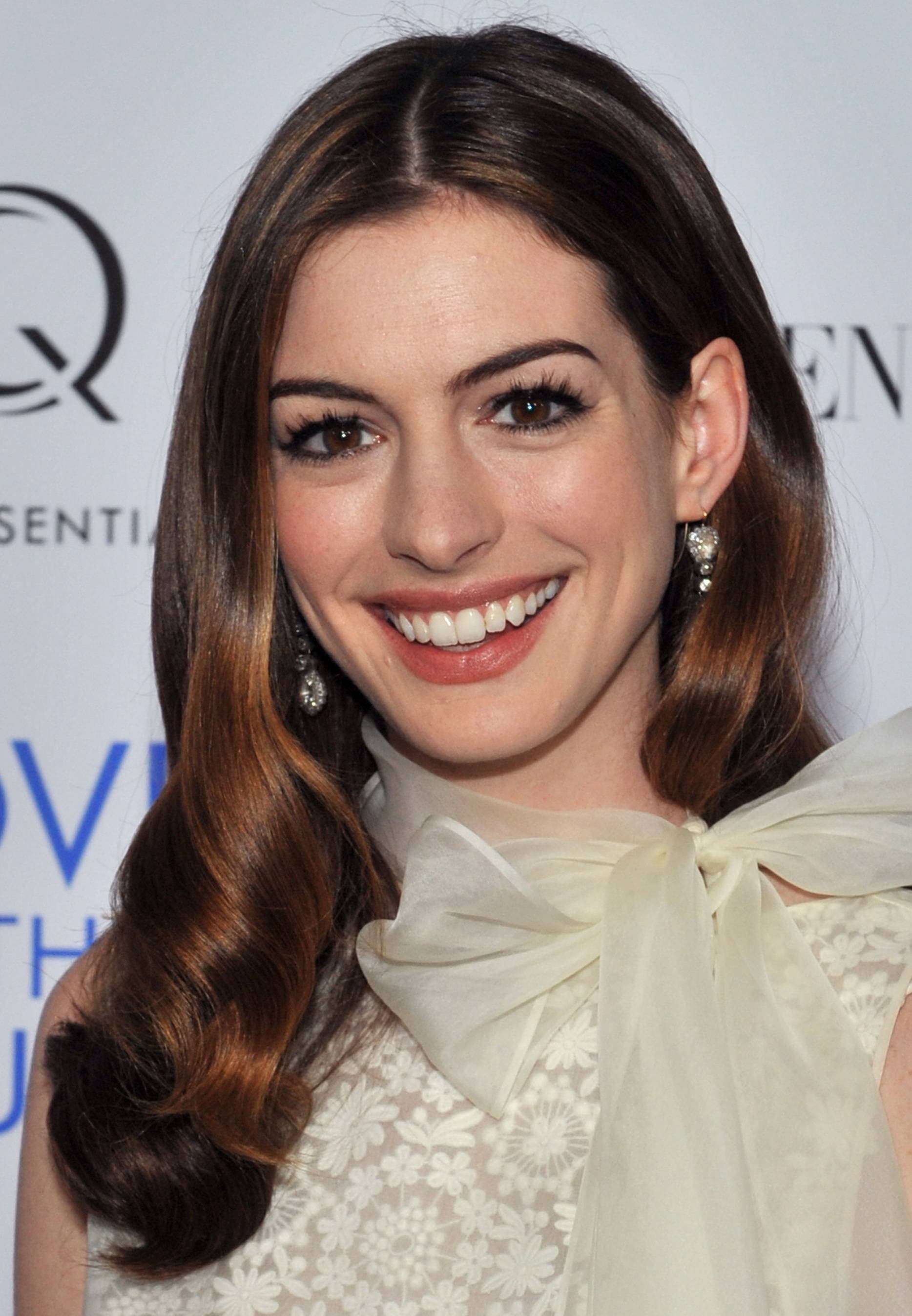 In her latest movie, The Intern, Anne Hathaway plays a woman whose successful high profile career as an online shopping entrepreneur threatens to derail her marriage and happy family life. Her dilemma, in many regards, is similar to that of any woman who’s ever asked: Can I really have it all? But help is at hand in the unlikely guise of Robert De Niro who joins her company’s senior intern scheme.
Hathaway, 32, herself seems to be having it all. Happily wed three years to actor-turned-jewelry-designer Adam Shulman, she won an Oscar for her role in Les Misérables and is one of Hollywood’s most in-demand leading ladies. Today she talks online shopping, social media, new beginnings and cultivating new respect for seniors.
Have you ever ordered fashion online?
Yeah, I did it two days ago. Net-a-Porter was having a 70% off sale and I was like ‘Nice! Time to buy The Row!”
How did you research the role?
I met with the people at Nasty Gal, Moda Operandi and I talked to a few different girls who are bloggers and started up their own businesses.
If you had the choice to buy things online or to buy at the shop, what do you prefer?
It depends. There are certain things you can’t find in the stores, and time is limited, so if you can find a special piece online, and deal with the risk of possibly returning it, then OK. There’s some amazing vintage things online, but it’s hard to trust a piece until you have it in your hands.
What made you want to do this film?
I had to audition but I was happy to audition, scared to, but happy to.
I was scared because I didn’t want to lose the part and it was such a good part within a great story being directed by one of my favorite directors and starring one of my favorite actors so, for me, it was just about: Please don’t mess this up Hathaway!
Do you learn more from working with older actors who have more experience and stories?
It’s fun to work with people whose work you are familiar with and that you respect and admire; a more seasoned actor will have more work to show. I don’t know if it’s a pound to pound comparison because of age, because I honestly think age is kind of a fluid thing but when you get to work with someone like Bob and you get to work with someone like Meryl you just have such a beautiful range of work to have learned from before you met them and then to have the opportunity to see how that work came to be, a little bit close-up is tremendous. I remember when I worked with Emily Blunt, she floored me every single day. I was so blown away by who she was and how she did it. And I don’t think I’d even seen any of her previous work yet so it’s a case by case basis, age not withstanding.

Do you remember how you got your first paycheck?
I was 13 years old and I was an extra in a stage production of Gigi at the Papermill Playhouse starring Gavin McLeod and I got paid $50 for about 13 weeks of work.
What did you spend your first paycheck on?
Leather pants! I called my mother before I did it too and said ‘I’m about to buy a really expensive pair of pants,’ I had saved up by then and they were about $200 and said, ‘Do you think I can do it?’ and she said, ‘Oh that‘s a really big decision sweetheart.’
Have you ever interned in real life?
When I did my character research for Devil Wears Prada I interned at Christie’s for two weeks. They were so kind to me so I think your intern experience probably depends on where you’re working. I had a great experience. I got to see beautiful art and talk to interesting people and they let me reorganize the library which made my nerd self very happy.
Traditionally, interning is about learning about a job that you may or may not be good at. Has there ever been something that you thought you’d be good at?
I was part of the generation that was told you could do anything, so I imagined myself doing all sorts of things. But the thing that I loved the most was acting and I can’t believe that I get to do it.
It’s so ridiculous that your childhood dream works out for you and you get to grow up doing it, it’s such a gift! I kind of got to be an intern in so many different things because of my job. I learned how to fight like Catwoman for my job, so I was kind of like a martial arts intern; for The Devil Wears Prada I got to be a fashion intern; for Les Misérables I got to join a choir. I got to do so many different things, and have short bursts of them.
I wasn’t asked to master them for the whole lifespan but for the lifespan of the character.
You say Nancy Meyers is one of your favorite directors. She was saying she faced certain difficulties getting the film made because it’s not necessarily for a large audience. Where do you think it will find its audience?
I think its audience lies with those who have beating hearts. This is a really heartfelt movie, uncommonly smart, and the humor is deft and sophisticated. I’m really proud to be in this movie. It’s not like many other films out there right now; they don’t really make films like this anymore. If people give it a shot, I think they’ll really enjoy it.
Is it possible to still observe people when you are always the one being observed?
Well, people talk very loudly on their phones. It’s true. Not just on their phones. People talk very loudly nowadays so sometimes you’ll observe people even if you’re not trying to.
What do you think about this idea for senior intern programs?
I think anything we can do to get away from thinking of human beings as having an optimal shelf life, is a really healthy thing. I think everyone has something to offer and if we treat each other right, no-one’s a burden.
If a senior intern program is a step towards embracing that then I’m all for it.
Did you enjoy playing a mother in the film?
Nancy cast a magical little girl as my daughter, so we had a great time together. I’m sure that playing a mom is no substitute for the real thing, but I’ll let you know when I’m on the other side of that one!
Is it still your dream to be on the West End stage in London?
The dream hasn’t changed, it’s to be an actor, and an actor in all ways, and I love getting to express myself in so many different ways.
It’s just about finding the right material and the right fit in the right moment. Of course I love the idea of doing something on the West End. What actor wouldn’t?
The Intern was shot in Brooklyn, so not too far from home, right?
I’ve lived in New York for a very long time but I moved when the movie was finished. My husband and I gave up our place in New York nine months ago, and I think we’ve been in New York for seven of those nine months…we clearly made the right choice there!
So where did you move?
Los Angeles.
Do you have favorite places/buildings in New York? Is there any special place that makes you feel sentimental?
I keep meeting all the other people I have been, like ghosts. I was walking down 6th street just off 2nd Avenue last night and I passed a building I lived in 12 years ago. It’s not a building anyone else would know but you just stare at this building and go ‘I was such a different person to the person I am now”, and the city of New York is so good for that. If you’ve been lucky enough to spend time here throughout your life, it keeps changing, yet you feel so rooted!

With Robert De Niro at The Intern premiere in London